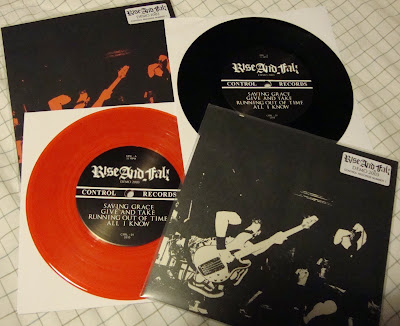 Rise And Fall has come a long way since the release of their demo in 2003. The band that was originally just going to be a bunch of friends from different bands getting together and jamming on some heavy hardcore quickly got out of hand. Looking back in 2010, Rise And Fall have released 3 albums, the last 2 ("Into Oblivion" and "Our Circle Is Vicious") on the renowned and well respected Deathwish label. Throughout the years they've made a name for themselves by writing relentlessly heavy, layered and metallic hardcore. Next to that the band has done countless European and American tours, and they even made it to Australia not so long ago.

This is where it all started though. The 2003 Demo contains the very first 4 songs Rise And Fall ever wrote, in their practice space which at the time was a spare room in guitarist F-Double's house. When Rise And Fall began practicing in the summer of 2002 the line up was: F-Double on guitar, Murph on drums, Vince on bass and Bjorn singing. After a couple of months AK joined as a second guitarist, making their sound heavier and beefier. It was at AK's homestudio ("The Spaceshuttle Compound") that these 4 songs were recorded in February 2003. A little later Rise And Fall got asked to play their first show. The show was in Ghent, with Dead Stop on March 19th. This was where and when the demo was originally released. When the band has run out of their 100 or so copies of the demo, Discontent Records from Holland offered to press another 100. Those sold out quick too and Rise And Fall soon started working on their next release. A few line up changes followed, with F-Double and AK leaving the band, Cedric joining instead and then recording their debut album "Hellmouth". The rest of the story is common knowledge or at least, easy to find.

Control Records is excited to present Rise And Fall's 2003 Demo, pressed onto vinyl, with a whole new lay out and extra liner notes by the band.

This limited pressing will be 100 on clear red wax for mailorders only and 400 on black wax. Both colors are available to order in the Control webstore right now!